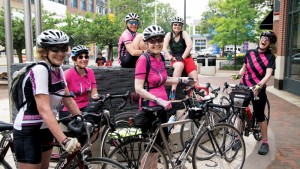 The Bethesda Babes are a free association group, with a core that includes Schaffer, Lawson and Brown as well as semiregulars and pickups, who spot the women riding or at an après-bike coffee shop. Often they’ll meet weekdays at the Bethesda Outdoor Pool to ride the Capital Crescent Trail, which they avoid on weekends, when it turns chaotic. The Babes ride three times a week, somewhere between 20 and 30 miles. Most have rediscovered riding in adulthood or are using it to rehabilitate a knee injury—or just because riding with other women is fun and frequently ends with socializing and a restorative snack. “We are a small, feisty group of seasoned riders who bike because we enjoy it,” Lawson says. “But we have had a challenge with people who were not prepared to keep up, didn’t have their own extra tubes or pump, and seemed to want to talk more than ride.”

Women are more courteous than men, they contend, and the Babes say they are highly aware of the less attractive habits of other cycling cultures. They ride with purpose but aim to be congenial. When they ride with the Wednesday Irregulars, whose members include some fast riders, they impose the “Anne Brown rule.” To wit: The leader may go out as fast as she or he wants, but is obligated to wait at any turn until the “sweeper,” or last rider, catches up. Civility also calls for discretion when nature calls, and thus Bethesda is a favorite start and finish because, as Schaffer pointedly notes, “It has places to go to the bathroom.”

The Babes are selective about which men they let ride with them. Kevin Beverly, the business executive, says he was invited a few times, and after his “tryout,” he was allowed to purchase a Babes on Bikes kit, which included a cycling jersey and shorts. “I was ceremonially given a lei,” Beverly says, “and permission to tell people that I have been lei-ed by a Babe.”