Our group started on a whim and as an artifact of insomnia. “It’s 4 am, I can’t sleep anymore, the sky will be light soon, why not go for a bike ride?” Astonishingly, there were several other Babes who wanted to ride at 5:30.

We ride from mid-May to late August, when the day dawns early, the traffic is light and it is possibly the only time of day it will be less than 90 degrees. Many of the group have school age children, enjoying a summer break from hectic morning routines. While husbands and kids slumber on, we roll around the quiet streets at a good clip and get finished with our daily workout by 7.  The rides start within cycling distance of North Arlington. The routes require some navigation, but the group hangs together. Typical distances are 20-25 miles and include a hard hill ride on Monday, a rolling ride (frequently in the Lake Barcroft or McLean neighborhoods) on Wednesday, and a relaxed ride on kinder terrain on Friday.

Occasionally we arrange weekend rides with remote starts, a favorite being the Blue Ridger and most recently 80-100 miles on Skyline Drive. We also usually manage to fit in some version of the Babes century in late summer or early fall.

If you’re an early riser and looking for some lively exercise in good company, consider the eBabes. Sign up to be notified of eBabes rides 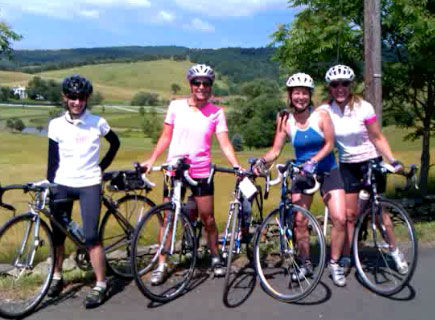